I figured I would blog about my winter sport biathlon after elk season to keep this thing going more than just a couple of months at a time, but alas, the weather has not been cooperating and the last couple of biathlon races were cancelled due to lack of snow.  Next weekends double header races is also in danger of being cancelled.

So what do I do when my number 1 is on hold, I find some other sport that leaves me in as much pain as biathlon does and gives me as much as a rush.

But first, a little about biathlon because it’s what really started this whole journey.  This is my second year of biathlon, the non-ubiquitous sport of shooting and cross country skiing.  It is almost non-existent in the U.S., but overseas it’s the most televised winter sport of Europe.  It’s no surprise then that biathlon is typically dominated by Europeans and the U.S. has yet to win any Olympic medal in the sport. *sigh*

But biathlon as a club sport has a dedicated fan base.  We slog uphill to the range two or three times a month to race on our teenie tiny course and everyone that participates loves to writhe in pain and sometimes collapse at the finish line (I’ve only writhed, I’m not that good to collapse).  There’s something about busting your lungs on the cross country portion then trying to calm yourself down enough to shoot a 115 mm standing or 45 mm prone target at 50 meters.

It’s terrible and difficult and I hate skiing uphill with a 10 lb rifle on my back, but somehow it continuously calls me back.  Anywho, the whole point of me talking about biathlon is that this is how I entered the world of hunting.  I was TERRIFIED of guns and a part of me knew biathlon rifles were “real” guns, but I thought during a safety class that we would be shooting little air rifles.

I was wrong.  Half way through the classroom portion of this safety class I thought to myself, “Why are they talking about this like it’s a real gun.” and then it dawned on me that I would be shooting a real gun.  I remember shaking a little when the instructor hand loaded the first cartridge.  I shot and nothing seemed to happen, but I shot and it wasn’t the most terrible thing in the world.  So I took another shot and the instructor looked confused and went “ah, I think you’re shooting on the paper.  scoot your sight to the right.”  and then plink, I hit my first target and it was the most satisfying thing ever.

Since it was obviously not that bad, I felt excited and a few months later I thought, “Wait.  I could hunt now.”  I went on to shoot a shotgun a few months later and then my dad gave me his .270 rifle.  Around this time Alex wanted to try shooting a bow and after a few months of him shooting on his own I eventually tried and began shooting with him at the bow range (and later, most often, in my carport).

But unfortunately this year’s winter has been bad.  So I’ve resorted to a different kind of sport involving as much cardiovascular pain as cross country skiing – uphill skiing, also known as skinning (but people that don’t know the term skinning look horrified when I say I’m going skinning).  I basically hike uphill on my skis using bindings that can unhinge at the heel with skins on the bottom of my skis so I don’t slide backwards.  When I get to the top I take the skins off, lock the bindings down, and have a roaring good time skiing down.

Back country skiing was going to be my winter sport before I met biathlon and part of me still wishes that I get more into it.  But the danger of avalanches is a little too much for me to mentally bear sometimes and trying to stay avy aware and prepared to dig someone out who is probably dead or almost dead prevents me from going into the true back country a lot.  So I discovered skinning at ski resorts, where I get the same exercise going uphill, it’s vastly easier to switch gears, and I still get a fun little ski down.  It’s definitely not the same as getting that untouched mad pow bruh (which is amazing and totally worth it when I’m prepared) and there will always be something incredibly special about my ski of most of Bierstadt and looking back and literally seeing my (not very pretty) crazy long line down, but I’ve really taken to no frills, no fuss, just grind, strap my skis on, go uphill, ski downhill all within a couple of hours or less.  It’s an incredibly satisfying best bang for your buck, which I desperately need as my free hours are not always that long.

So any who, sorry if there’s anyone who actually reads this and was expecting a hunting post and alas it was actually a disguised mad skis post bruh.  Anyway, here’s a bunch of pictures. I probably should’ve splattered these throughout the post, but ah well. 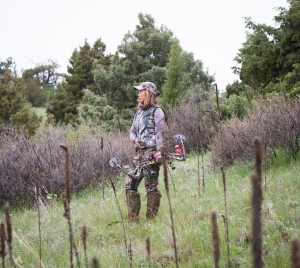 Hi, I’m Stephanie! I am a new hunter and have decided to focus on bowhunting elk in Colorado for the past two years. I picked up my first firearm (biathlon rifle) three years ago and my first bow two years ago and have never looked back!